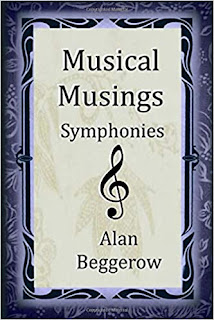 This book is a compilation of two volumes of the series Musical Musings, Symphonies Parts 1 and 2, articles that were originally on my blog Musical Musings. Included are all 9 symphonies of Beethoven, 11 symphonies of Bruckner, and 4 symphonies of Brahms along with other entries by known and lesser-known composers such as Pejačević, Méhul, Arriaga, Schulhoff, Rott, and others. There are over 40 different composers represented and over 100 symphonies.
Posted by Alan Beggerow at 2:52 PM No comments:

The history of keyboard musical instruments is a long one. The first known keyboard instrument was created in the 3rd century BC in Greece by an inventor named Ctesibius of Alexandria. This instrument was known as the hydraulis and used water to build up air pressure that went through pipes to make sound.

The wind pipe organ replaced the hydraulis in about the 4th century and uses wind pressure created by bellows, or with the modern instruments, blowers. Next came the clavichord and harpsichord, both roughly from the 14th century, which were both replaced by the piano-forte in the late 18th century. Each instrument (besides the hydraulis) has left a large legacy of music written for it specifically or that can be played by any of them.

This book is a companion to the first part of Works For Keyboard which contains 45 works. With this second part of 50 works, the span of composers spans from the Baroque era with J.S. Bach (ca.1700) and the complete two books of The Well Tempered Clavier to contemporary composer Stephen Scott and his composition for Bowed Piano Entrada. The piano is the dominant instrument in this volume, and remains the most popular keyboard instrument to date. But there continues to be interst in older (and some newer) and different keyboard instruments. With the acoustic piano starting to give way to electronic pianos, electric organs, and synthesizers, who knows what the future holds? At the end of each article I have included a link to the original Musical Musings blog post which will have a video of the discussed work, as well as musical examples. Happy listening!

Posted by Alan Beggerow at 10:05 PM No comments:

NO PURCHASE NECESSARY. Ends the earlier of Sep 19, 2019 11:59 PM PDT, or when all prizes are claimed. See Official Rules 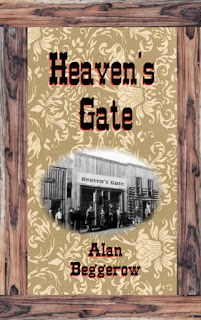 Posted by Alan Beggerow at 3:15 PM No comments:

This 10th volume of articles from my classical music blog Musical Musings is Part Two of the Chamber Music category.


The articles contained in this ebook range from the 17th century to the 20th century, with well-known and not so well-known composers represented.

Chamber music by its nature is a very intimate form of music. There is beautiful, powerful and passionate music within the genre that is unique to chamber music. I hope this modest volume adds to the musical pleasure of the listener by giving some information about the composer and analysis of the works being discussed. There is also a link to the original article on my blog, which has a performance of the specific work being discussed, along with some musical examples.

As always, I invite any and all to visit my classical music blog Musical Musings for other articles, illustrations and musical examples.
Posted by Alan Beggerow at 7:38 PM No comments:

The human voice is in many ways the most flexible and expressive musical instrument known to man, as well as being the first. The organization of sounds that developed into the first musical systems of the world were based on the human voice, and professional composers have been inspired to write for it for centuries.  Contemporary popular music is almost exclusively for the accompanied voice, and classical music has a huge repertoire of vocal music for soloist, chorus, and all kinds of combinations with instrumental accompaniment.

This 9th Volume in the Musical Musings series of articles about classical music continues with works that are for or include the voice. All types of vocal music are included save for opera, which I consider to be a separate category in itself.  The time line of composers is from Claudio Monteverdi (1567-1643) to Dmitri Shostakovich (1906 - 1975) and range from works for solo voice and piano, to works for soloists, chorus and orchestra. The mix of compositions contained within also range from the well known to the obscure.

Most of the works are not in English, a detriment to understanding for some. Indeed, the essence of most vocal music is in the meaning behind the words and how the composer has molded the music to them. But the listener who accepts the challenge of exploring the words and music will be rewarded with hearing some of the most powerful, beautiful, and masterful music written.


Translations are included for the text of each work. These translations have been gleaned from various sources. Some are copyrighted, and proper credit is given to the translator, some are in the public domain, and for some of the lesser-known pieces I have provided my own English translation. I am by no means a polyglot, and these translations were done with the help of the computer. As such, they can only give an approximation and are intended to give a general idea of the original text’s meaning.

Posted by Alan Beggerow at 7:55 PM No comments:

This 8thVolume in the Musical Musings series of articles about classical music continues with selected compositions in the genre of the symphony. As in Part One (Musical Musings Volume II – Symphonies Part One) there are well known works represented in addition to works that are less well known.

The symphony evolved over many years, and this volume includes a symphony by one of the first acknowledged composers who wrote in the form, Giovanni Sammartini, who began writing symphonies as early as 1732.  So the symphony as a form has been around for nearly 300 years.

There are 50 works included from 26 different composers, including two women composers; the American Mrs. H.H.A Beach and the British Alice Mary Smith.  As with the rest of the volumes in the series, there are links to performances of the works that are discussed included at the end of each article.  I invite one and all to visit Musical Musings, the blog where these articles first appeared.

Posted by Alan Beggerow at 2:31 AM No comments:

The history of concerted music for orchestra and one or more soloists is a long one, beginning with the early Baroque period (beginning roughly in 1600) to the modern contemporary period. The repertoire for one or more soloists and orchestra is huge in sheer number and variety of works, hence the Concerto category is the first category to have a second volume devoted to it.

The solo concerto really came into being in the early 18th century with the Italian composer Antonio Vivaldi who made the concerto a vehicle for a soloist on one instrument with orchestra backing. He also steered music away from counterpoint and fugue and into the more accessible style gallant.  Vivaldi’s innovations in style and content led to the result in t he early 19th century of the performer/composer, virtuoso performers that wrote music for their own use that would show off their prowess on their given instrument. Many composers first made a name for themselves as performer/composers such as Mozart, Beethoven, Chopin, Liszt, and many, many more.

This 7th volume in a series of ebooks about classical music composers and their works is a collection of 50 concertos. Included are works by familiar and unfamiliar composers, as well as well-known and so not well-known compositions.  There are 37 different composers included, so this volume has the greatest variety of composers of any other of the seven current volumes.

As with the rest of the volumes in the series, there are links to performances of the works that are discussed included at the end of each article.  I invite one and all to Musical Musings, the blog where these articles first appeared.

Posted by Alan Beggerow at 11:21 PM No comments: